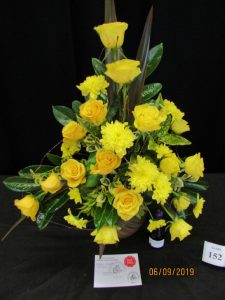 Mr. G. Bennet of Greenwood Road was appointed the first President and a committee was formed to look initially at the Show Schedule. This was assisted by adopting the Show Rules from neighbouring Mearns Horticultural Society which had been going since 1871

The next Show was held on 4th September 1948 in Busby Primary School, establishing the tradition of holding the Annual Flower Show on the first Saturday in September. Membership was around 250, not dissimilar to what we have today

The Society continued to meet alternatively in Busby East & West Church Halls. Whist drives, bulb shows, summer outings and dances were very popular, taking their place in the programme alongside the Annual Flower Show and the winter lectures

It proved to be a very successful organisation and flourished over the succeeding years. A move was made to Clarkston in 1962 with the name Clarkston added and Clarkston Halls used as a base

During its life, the Society has progressed and is now an established entity in the community, supported by local residents and businesses. Links have been forged with like-minded local and national groups through the Scottish Gardeners Forum

A booklet commemorating the 60th Anniversary of the Society has been published incorporating local historian, John McVicar’s exciting insight into the foundations of the current Society. You will be as amazed as we were to read that The Busby Horticultural Society was founded in 1881 and mounted its first show in Wilson’s Hall at the end of August 1882

We have hosted Beechgrove Potting Shed twice at Clarkston Halls in 2004 & 2011 and Radio 4’s Gardeners Question Time also in 2004 at Eastwood Theatre.