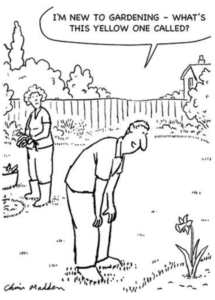 Our March Talk “An evening with the Gardener” was well attended and well received. The top raffle prize of a living wall was something to behold. Well done to the winner for even getting it home and thanks to Bill Peebles for donating it.

Our 21st April talk is a corker, when Stan da Prato outlines his investigations into “Crimes behind the Compost Heap”- where murder and mayhem abound. We dare you to be there, but don’t come alone! Stan is coming through from Edinburgh, where he is a member of the Caley so please support him with your attendance.

Coach trip numbers now at 42, so only 3 places remain. Instalments can be paid at April & May meetings.

Divide herbaceous perennials – time to divide clumps of perennials as the first flush of growth pops through the ground. Phlox, Day Lilles, Echinacea, Hostas etc lifted, divided and replanted will invigorate plants ang give you some for free.

Deadhead Daffodils – as the chap in the cartoon is about to do, remove faded flowers and allow the leaves to die down naturally. This means the plant can still photosynthesise and feed the bulb for next year. Do not fold over & tie! p.s. – that chap was me – 40 years ago!!!

Mulch your borders – with all that fine weather in March, weeds are starting to appear. Remove them now and top dress the soil with last years’ compost or well-rotted manure. Be careful not to cover the crowns of newly emerging perennials, whether replanted or not.

Sow vegetable seeds outdoors – only when the weather is fine and don’t go mad. Better to sow short rows in succession a few weeks apart to avoid a glut later in the season. Probably best left to end of the month. Potatoes can be planted in the ground or in bags later in month.

Prune hardy Fuchsias – stops them becoming woody if you prune back to near ground level or to a healthy bud. Spring flowering shrubs -such as Forsythia & Flowering Current can be pruned after flowering & will flower again next year on this year’s growth. Prune Cornus hard once you’ve enjoyed this year’s coloured stems. Gives stronger growth to admire next Winter.